Tetra A case for LimeSDR-A : JUNK!

I received a Lime SDR Type-A and Tetra A case to “protect” it. The case claims to be CNC made but does not resemble that type of quality at all. The holes for the sma connectors were way oversize and the provided connectors spun even though the case had flat spots.

Due to the instructions to tangle and fold the all identically sized pigtails causes the lime to fail the self test due to poor signal quality. I had -21 dbm fail on one of the last freq checks. (I have a somewhat related photo included of the WCDMA loop back test. Although there could be other causes for the two signal levels the case is very suspect 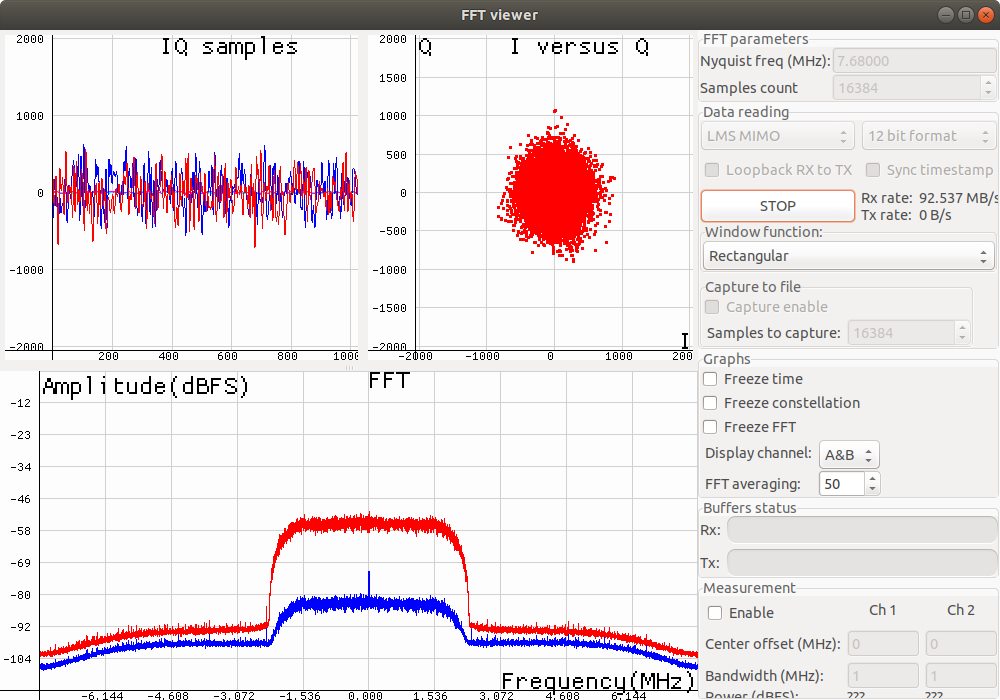 Even more disappointing is that the heat sink doesn’t actually touch the components. I’m pretty sure air gaps don’t transfer any heat. I kept adding more and more excessive amounts of the provide thermal compound and putting the top lid on and off but NONE TRANSFERRED until I really over did it!! I’m certain it will not stay. There is a huge gap and yes I don’t have pinched wires anywhere. This could probably be remedied with thermal pads.

The device as I received provided two functions. One trap heat. Two cause a lot of self interference.

I would avoid this very poorly made case!!

The finish had several marks and the metal on part of a heat sink had a big pit. I can add some pictures at a later time.

Does Crowd Supply do any quality control? They said they would look in to my concerns and offered a return. I suggested they should have never sold these.

I would just note that this is not a MyriadRF or Lime Micro product and I have no idea what the QC process is. With LimeSDR we have records we can pull up for individual boards and given a serial number can refer back to these to get the factory test results etc. But obviously we cannot for third party stuff.

Yes. Sorry I did not clarify this is 3rd party product. My impressions of the LimeSDR are very favorable but a bit of a learning curve for me as a hobbyist. 12 layers and so pretty!!! I digress.

Also sorry I have not updated this post. I believe the Tetra Case of that other companies’ line would be the one to suffer most from interference, maybe obviously having all 12 pigtails folded! However my post was intended to warn anyone looking at these. Mine is still in the case but I don’t intend to transmit for now. I will probably rework the case with shorter sma pigtails and thermal pads. The board is not safe bare around me! I also don’t like u.fl connectors and the supplied case pigtails seemed most difficult. For $130 I feel I’ve been had (left to rework it or go thru return) Even being a short run product.

At some point I can add before and after self test and some relevant photos.

Crowd Supply offered a return and refund but that’s a real pain. Seems easier to rework than transfer to another case.

I made a reply in another thread where this post got commented. You may want to keep the pigtails the same length. With them the same length you’ll have the same amount of signal loss between all the ports due to the pigtails. It also doesn’t mess up signal timing due to the cable lengths if you’re using multiple ports and your application is that demanding. If they’re properly shielded it should be not issue for them to be all coiled up against each other in the case.

That said I wish they didn’t use those u.fl connectors on that board. My understanding is those connectors are only rated for 30-50 reconnections. I am not sure what is the weak point on those connectors, the board mounted part or the part on the pigtail. My guess would be the pigtail. Still a chance of ripping the connector off the board, and having pigtails that are flopping around in the breeze accidentally shorting against the board if used outside of a case. Not really ideal for a hobbyist board. You pretty much want to just leave them connected all the time with SMA pigtails on them. I am glad they went with SMA connectors on the mini which is what I ultimately ended up getting.

That shouldn’t be an issue for me anytime soon. I will keep it in mind though, thanks. Do you really think an inch or two difference could possibly create any significant latency? I’m sure I could get the formula, calculate it and see. Although I did see the GPRS (or one of them) timing is super sensitive. If I could suck keys off of sims it could be interesting. (Proof of concept of course.) A honeypot wasn’t really on my project list.

So my lazy butt finally opened up and took pictures of my Lime A Tetra case from the 3RD PARTY supplier www.hackergadgets.com . I discovered that I had in-fact pinched a wire. I was beside myself ready to post an apology and eat some humble pie. I took pictures and really felt bad. Then I corrected the problem and inspected , ran the self test .1 dBFS different to pass. I looked at the transfer of thermal paste, or lack there of, and realized no the thermal coupling is still poor. I have kept mine flat to keep the paste in place. The finish is awful! Did I get an RMA as new?! I still need to rework this with thermal pads and 5 shorter SMA to f.ul piggies. And look at the orientation of the provided connectors! (The SMA holes are way out of a reasonable tolerance.)

I still think this is a rugged case that no one else produces and I am keeping it. However lower your expectations and consider replacing all the piggies and getting thermal pads. Had I known this is what I would receive, I would not have bought this but a larger case and individual heat sinks. A larger case would also leave access to the gpio and space for expansion boards. This style is probably more suited for the Lime Mini but I have not put my hands on one. I plan to shorten the four TX and the input clock however I plan to use GPS discipline. 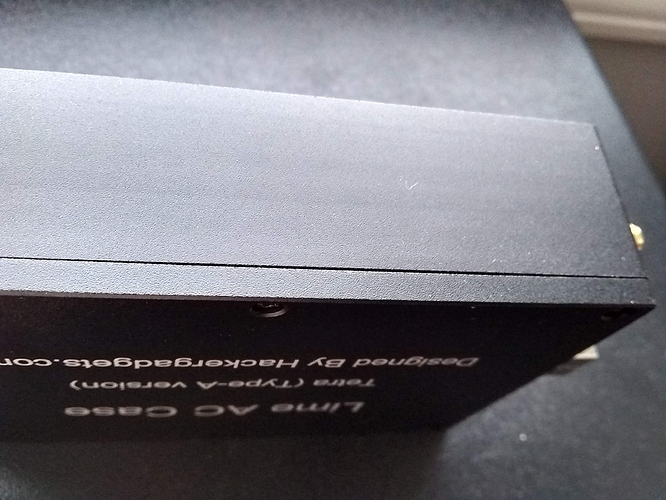 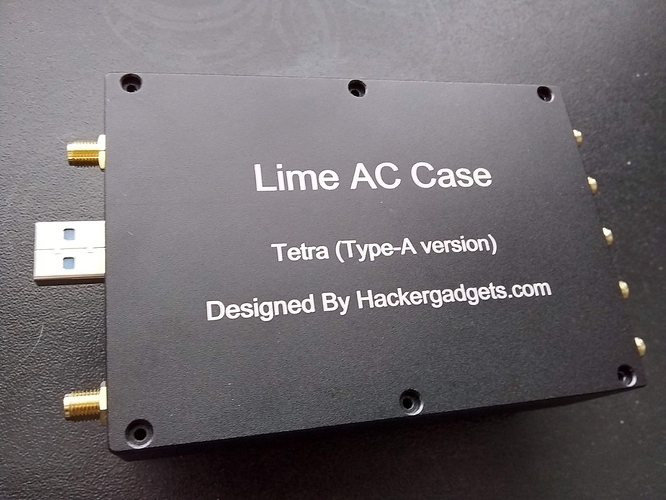 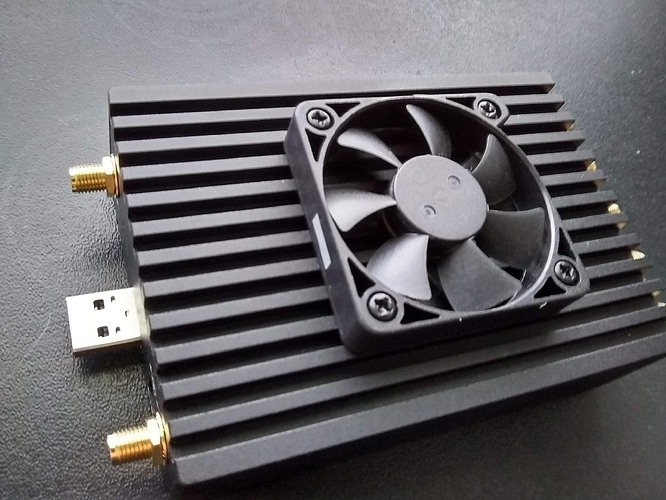 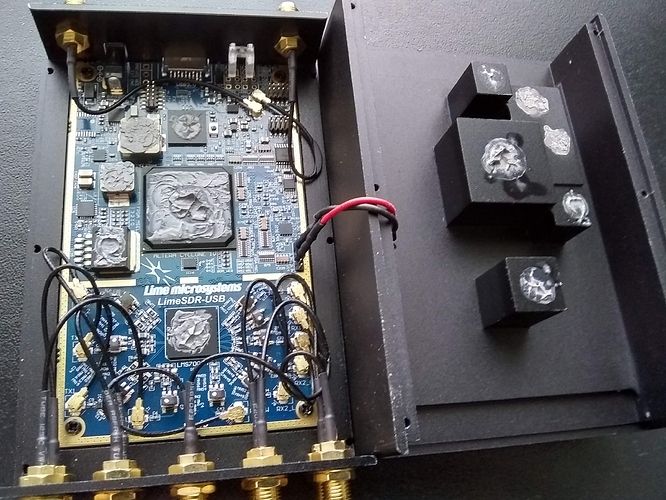 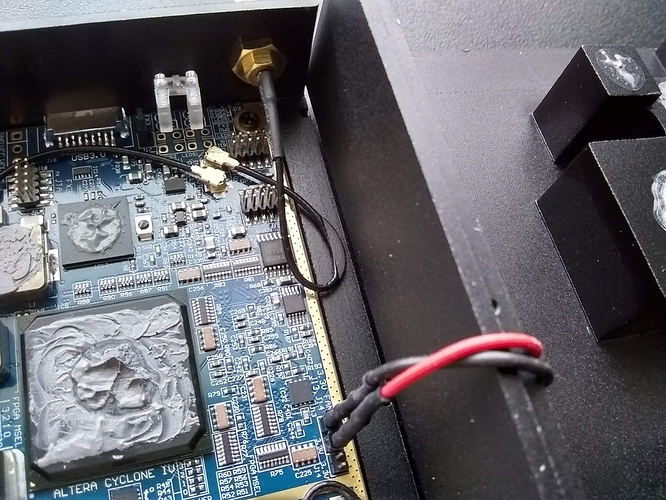 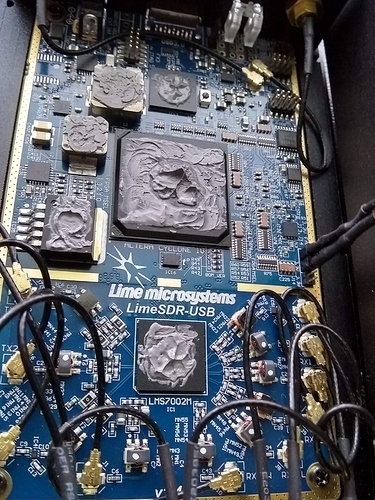 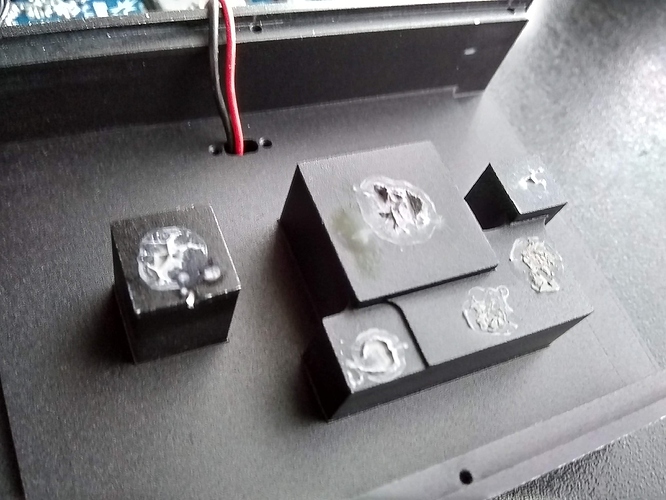 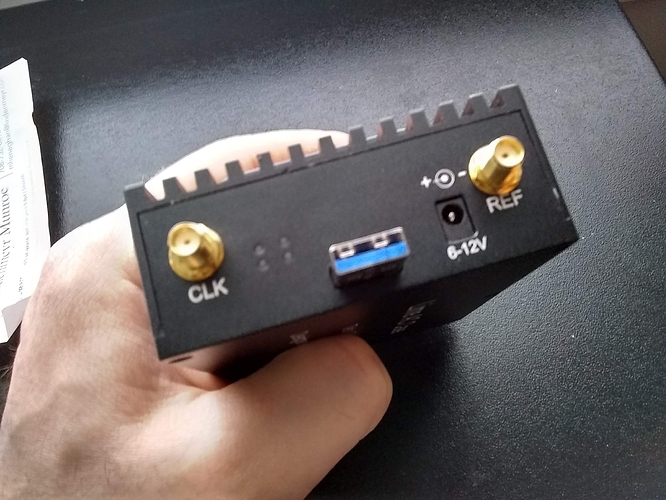 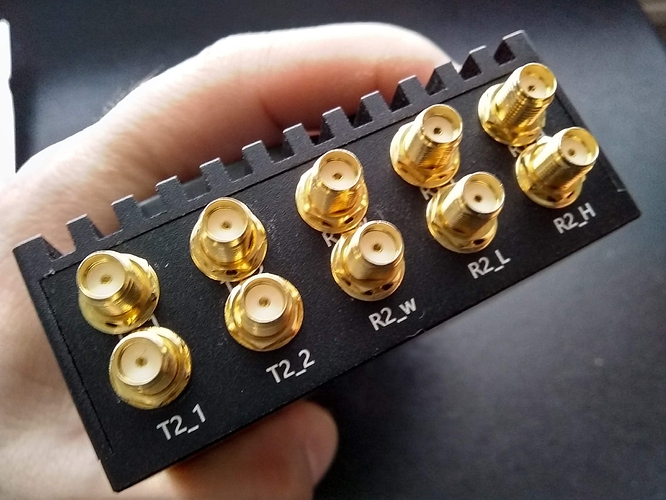 I also purchased two of the Tetra cases. The board does does not seem to exhibit any issues works fine inside and outside of the case. The other board that seems to have a problem has not been in a case yet. I agree about the tolerances of the SMA holes. They’re slightly too big. I also plan on using some thermal pads of some kind to make a better connection between the components and the case.

Running the LimeQuickTest on the suspect board, produces some interesting results, with random errors in the LMS7002M test and RF Loopback test.

I’m going to contact Crowd Supply tomorrow and ask about getting a replacement or have them walk me through determining what the problem is.

Running the LimeQuickTest on the suspect board, produces some interesting results, with random errors in the LMS7002M test and RF Loopback test.

I’m going to contact Crowd Supply tomorrow and ask about getting a replacement or have them walk me through determining what the problem is.

If you could create a new post (not on this existing topic) and include details of the LimeQuickTest results. Then we can diagnose and if need be, authorise an RMA.

Per your suggestion, I have created a new topic in LimeSDR.

So I’m confirming that the supplied u.fl to sma pigtails are junk that came with this third party case. Fortunately my Lime survived! The connector did not have good continuity or could not handle the tiny load! With a little bit of disassembly I pass the LimeQuickTest… photos… 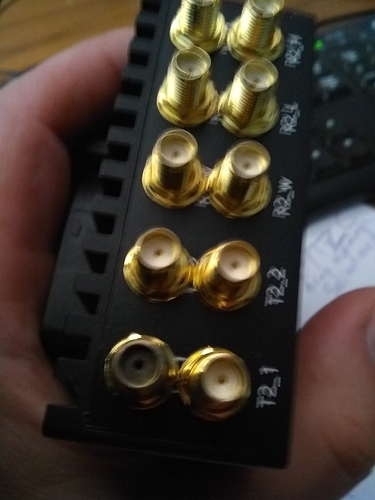 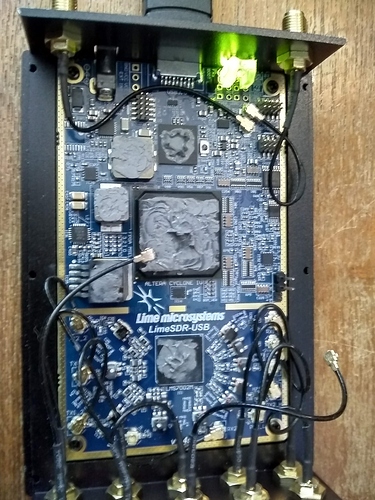 How did you solve it ?

Is this coming from the bad quality u.fl -> sma card or cable ?

With the u.fl -> sma cables I have the error.

LimeQuickTest should only ever be run with no cables attached to the SDR. The moment you attach any cables, damaged or not, it has the potential to influence the test results. If it passes tests without cables attached, it’s good.

Perfect. Thank you very much.

Hello Grimmace.
I have the same “problem” in my first test.
You may have the wrong procedure.
In self_test MODULE->FPGA controls->
You should first check the MIMO then the W-CDMA.
That will work fine.

Can you tell me what to do exactly to stop having this “problem” please ?