LimeSDR as a Amateur Radio Transciever

Let’s say I’m interested in 10 meters waves (28 MHz). According to the picture in this discussion:

… on this frequency LimeSDR gives about 16 dBm output power on TX1. Can I use LNA4ALL on output to gain a signal (21 dB according to this table)? 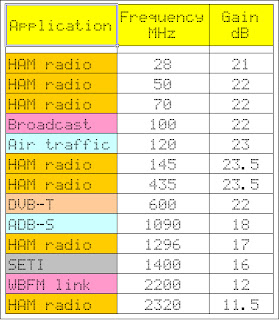 It means that LimeSDR will be turn into 37 dBm (or 5 W) transceiver, right?

Also could you please recommend a software that can transmit and receive ham radio signals, preferably Linux compatible?

LNA4ALL, as the name suggests, is generally a Low Noise Amplifier, meant to be used on RX side. Of course, you can also use it on TX side, but need to be aware of its maximum output power, which according to the blog post you have given will be around 21 dBm (or 125 mW in a linear scale):

Beside the LNA purpose the same component can be used as a small driver amplifier capable of delivering +21dBm of output signal thanks to high P1dB value.

The following link will provide an HF to UHF amp that drives at 0dBm (you may need an attenuator ahead of the amp from the LimeSDR) and provides 3.2W of power - enough to drive a significantly bigger RF PA:

Here is the PA board I have from EBay and I bought the heatsink separately (also on EBay). This PA drives at 0dBM and provides 45W of power on HF. Here’s are the links:

1 x Aluminum Heatsink Radiator. It can be used interchangeably. Photo is for reference only. Hope you understand. OEM Charging Port Flex Cable For HTC Incredible 2 ADR6350, Incredible S PG32130. We might require you to send us photo/s of the item...

@martywittrock Thanks a lot! BTW great videos ( LimeSDR Operates with LattePanda Win10 64-Bit with SDRAngel ). I googled them just today but didn’t realize you are the author at first

Also I’ve played a bit with SDRAngel. It works great on Linux.

Using the LimeSDR as a Amateur Radio transceiver is a very interesting idea. I’m loving using SDR + gqrx for listening, but feel like I’m in the stone age when using a regular radio for TX.

How is it working for you? What OS and software are you using? Do you have voice and digital modes working? What bands are you using? How hard was it to connect it all up (LimeSDR -> 45 watt linear power amplifier. Anything else needed besides a PC and antenna?

Adding 45 watts comes in stages. In the HF region,

Hello Shao, Please find the maximum transmit power (CW) for LimeSDR in the attached graph below (note that X axis is not logarithmic). The output power is close to 15dBm at 950MHz when using TX output 1. [LimeSDR_transmit_power] Hope this helps, Karolis


https://wiki.myriadrf.org/LimeSDR_HF_Performance
You will see that lower HF output is low. Also, you get about 10Dbm output (10mw) that has to be upped first, filtered, then fed to an amp, filtered, TX/RX switching & bandpass filters for the receive. That is what I am doing for a project.

I haven’t laced-up my LimeSDR to a 45W amp yet, but it’s totally possible to do so since the Lime drives (for the most part) to +10dBm. In those cases when it doesn’t, ALC (amplifier leveling control) would be what I’d use to level the power to a constant +10dBm no matter where I’m tuned in the HF and V/UHF bands.

In terms of the application I’ve been running, check YouTube and look for ‘martywittrock’. There are several videos associated with the LimeSDR running with SDRAngel (the app that I use most for voice and data transceive). Earlier versions of the Lime firmware and earlier versions of SDRAngel work excellent together - - right now there’s been an issue with both the firmware and SDRAngel not playing well together, but the previous versions (one version back) worked very well on HF.

Hope this helps - let me know if you need any further info,

My sdr is already set up for a drive of 10mW … to an output of 100w HF.
Once the lime is able to switch over and perhapse band select i might make the lime as perminent.

OK, here’s the somewhat finalized TX chain, copper spreader (Under amp modules), heat sink, enclosure & autotuner.
Since I decided that there was no way possible to fit everything in the 2"X10"X12", so, I discarded the back shell & will be making a new one that gives me 3 1/2 - 4" of depth. 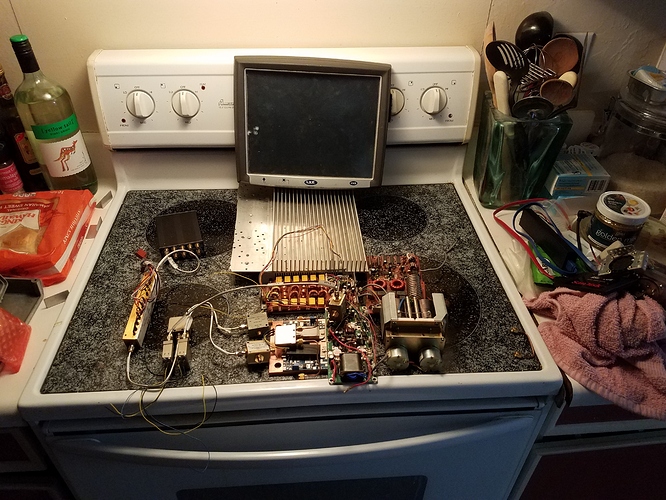 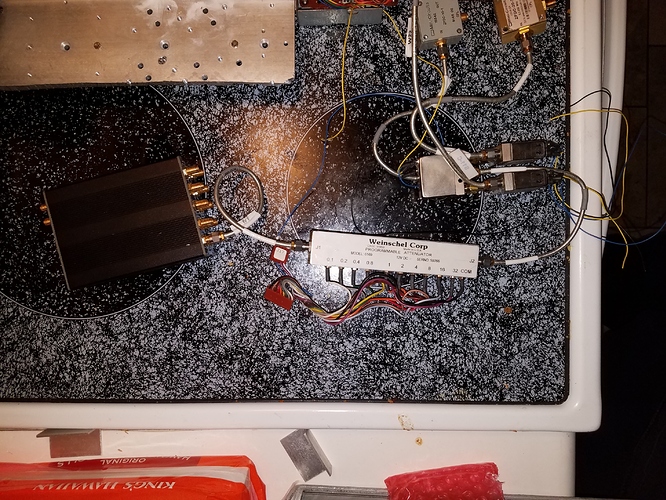 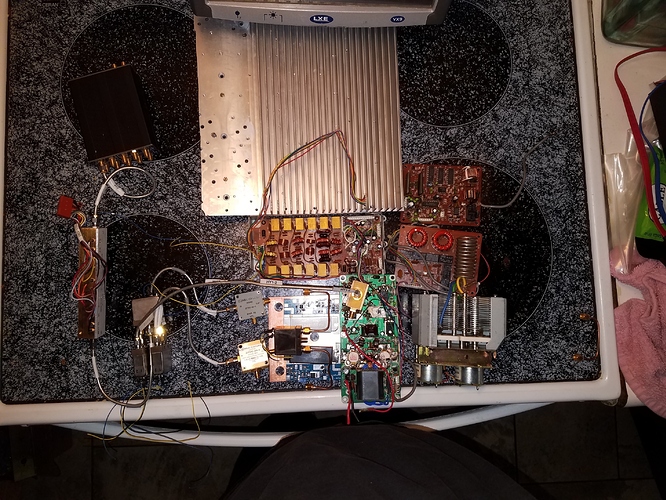 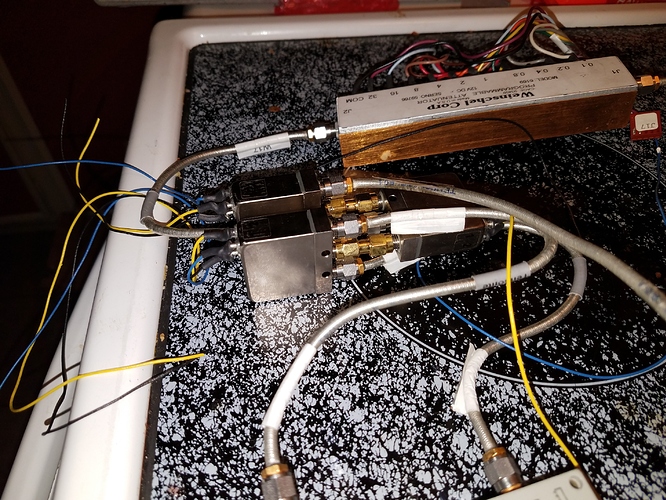 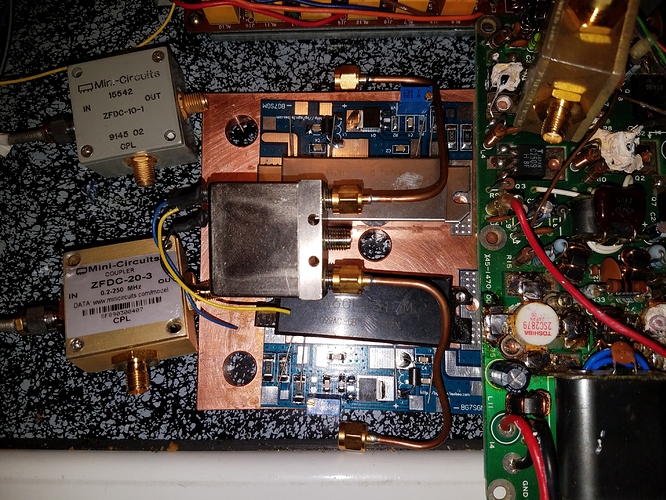 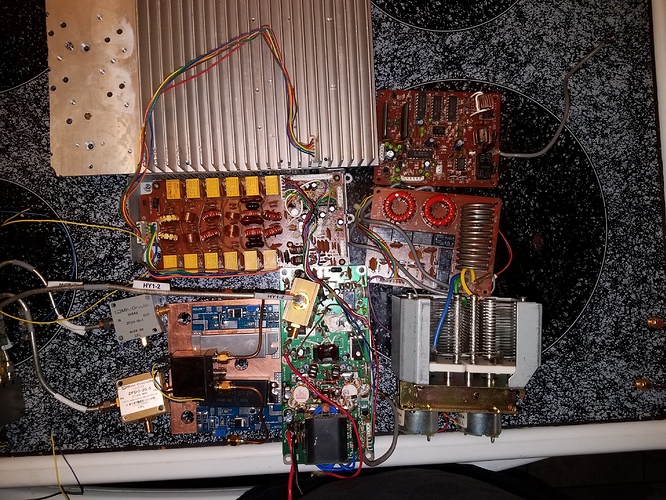 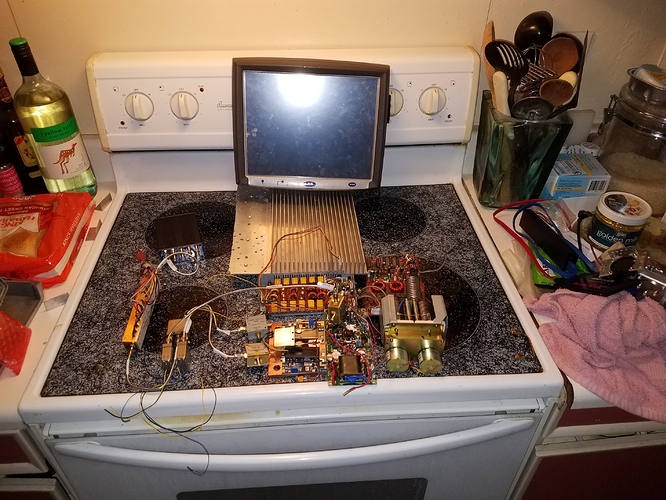 All ports of the Lime will still come out the back. THe input to the LimeSDRUSB will be KVMd to allow operation from the Udoo X86 Ultra, or, any other PC. Network, DP/HDMI, RS-232, USB3.0 & a GPIO plug for 12-15 connections.

I am sure that there will be more, along the way, but wanted to show what the plan has morphed into.

Holy SHIZZLE…!! You’re A LOT further ahead of me on this than where I’m at…! When I get my life back in 2 months (I’m working on a renovation project that is my future QTH) I’ll be able to give you my spin on this, too, but it’s in-line with what development you have cooking there…!

Keep on truckin’ on this one, Ed - looks GREAT to see all the pieces come together to make what we’ve all wanted to aspire to…A LimeSDR based broadband transceiver (HF, V/U/SHF).

My best advice:
Start looking for a TS-2000 or some other “DC to daylight” rig for a donor. Newer serial MKIIGs would be good.
It will save a lot of headaches I am having, due to 3 different amp modules.
But, this is all a learning process.
At least with making a new backshell gives me the room to jam it all in. Also changing to different relays SP4T with 50 ohm terminations for unused connections. They will be on input & output.

Well, I’ll be looking for a bottle of aspirin because that’s the way I’m doing it, too…Nothing like REALLY rolling your own on this project…! Keep at it and let us know your progress…Once I get my life back from this renovation I’m going to take the dive, too…

The company HobbyPC sell a band pass filter for 2M, 1.25M or 70cm for 20$ each that can handle 20W … I have some and they are more than adequate … I use a low pass filter after my VHF amp because it outputs 100W with roughly 10mW drive (single block amp with bias control for SSB)

Do you guys have any updates on your amped up limesdr? I’m very interested in hearing how it worked out. I’d like to make an HF rig using a limesdr.

I have had several projects going & haven’t gotten back to it. BUT, I picked up an FT-857D chassis, with a blown driver. The PA deck is fine. Once I figure out the signaling into it, I will slap it all together. It just has a TX input & RX output, along with LPFs, BPFs, Diplexers & the such. Perfect.

I have ordered two of the Power Amplifier Kits and heatsinks and waiting for their arrival.
Do you have the assembly instructions? I cannot find them online and the link given goes
off to some other place.

I am in the process of putting parts together for my radio. LimeSDR + BeagleBoard X15.

This is how looks 2m band today in KN05AD (its is contest time, not sure which one): 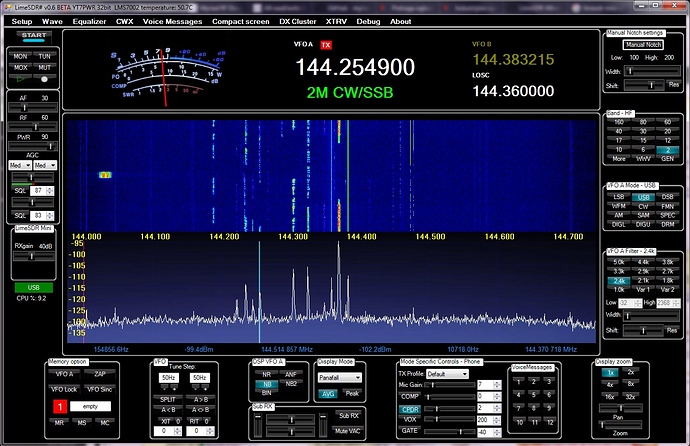 I purchased my amplifier reassembled with the heatsink - so I don’t have any assembly instructions but the seller has to (according to what they have on EBay).