I have bought LimeSDR from Mouser. I used it to broadcast analog television. It worked with for less than a week and then it failed. Sometimes there were “Gateware version mismatch” errors, however the firmware was up to date. Now all the LEDs are off and the computer does not see the USB device. After a week of exchanging emails Mouser support team refuses to replace it and asks me to verify that my LimeSDR is faulty on this forum. Insane, but I will do it

I have done a small research and found the following.

There is a small coil FR38 on the board. It on located in the power circuit near the USB socket and is responsible for voltage stabilization for all the board. Multimeter shows that this component has infinite resistance, but it should be near zero ohms. The voltage on it’s terminals is about 5.1 volts, but should be zero. The FR38 coil has failed. I have searched this forum and found that this is a common problem. There were LimeSDR owners who had experienced the same problem even with new and freshly unboxed LimeSDRs. I don’t know if any other components failed also, but people say that IC25 is also common issue. It’s impossible to determine it before replacing or short circuiting FR38. I will not do that to prevent any additional damage.

I have used my LimeSDR without any external power supply and with super hight quality workstation-class motherboard (assembled by Intel itself). So the motherboard should not be an issue. I haven’t measured by myself, but people on say that the current draw of the LimeSDR may be up to 1.2 amps and even more. It is likely that such a small coil can not handle so high current. The errors I had got may be also related to the faulty or insufficient FR38 coil.

Any suggestions what to do next?

From you describe it certainly seems like this shouldn’t have happened and was pretty sure we’ve only seen this before with use of an incorrect external PSU.

@Zack, anything else to suggest before we arrange an RMA?

Thank you for your replies!

I haven’t used external PSU. My LimeSDR was used to broadcast analog television through only one channel. Since I do not have a license for these frequencies, I used only half the transmit power. The RF receive functions were not used and the television was about a meter away. I decided that an external PSU would not be required in these conditions. Was I wrong? Is it possible that insufficient power damaged the board?

I found two cases when people faced a similar problem without an external power source.

No nothing - and I wasn’t even using an external supply when it happened. It was just running off USB, idling as I was doing DATV stuff. Worked earlier and then was cold and dead. I see the ferrite choke identified above has failed and there is a low impedance on the far side of it. I think something has failed in the power supply, or worse. No idea how to proceed apart from sending it back.

No power for a new LimeSDR LimeSDR

Hi all, I finally received my LimeSDR board yesterday. Sadly, I don’t think it is receiving power at all over USB, as nothing at all happens when being plugged in

I’ve already fired an email off to Crowd Supply, but thought I’d post here with my troubles in case I’m missing anything completely obvious. I have the board with the female micro-USB socket on it. I’ve used two different cables, one stolen from an external HDD I have, which spins up when using both cables. No LEDs light …

As I wrote before, I had experienced “Gateware version mismatch” errors. Please see the following screenshot. 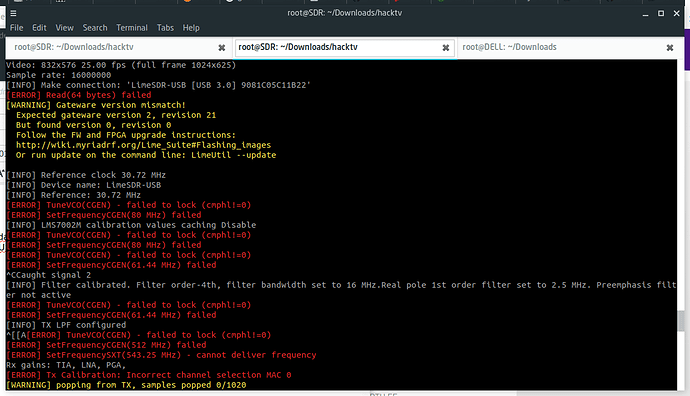 LimeSDR_gateware_mismatch.png1241×713 133 KB
The firmware was updated using LimeUtil as described in quick start guide and returned no errors. No settings were modified in Lime Suite GUI. Maybe these errors caused the power circuit failure?
DmitryP October 22, 2019, 8:58am #5

@andrewback and @Zack, thank you for arranging RMA! Yesterday I received replacement and there are no errors or gateware version mismatch warnings as I experienced before.

Can you give us brief advice, in which conditions heat sink is recommended and when it is mandatory?

What about active cooling? When it is recommended and when it is mandatory?