Not new but almost unused Lime-SDR mini died on me? (failed to start rx mode)

So once it arrived, everything worked. I played around with Universal Radio Hacker and stuff.

Due to lack of time, it ended up in a locker after a couple of days.

Until today that is, which is when I pulled it out just to see that:

Universal Radio Hacker wouldn’t be able to use it (Raspberry Pi 3):

Thought maybe was something wrong with Rasp… USB 2.0 instead of 3.0 …maybe voltage too low and stuff… so I bought an USB HUB, which was supposed to give it more joice… nothing… same…

So I plugged it into a Windows 10 box. Same.

which is when I started to become worried… but come on… I said to myself…it must be something with firmware… maybe… right?

Flashed it like 3 times…not with --update but explicitly providing bin files… nothing.

It does not look completely dead. Seems the failure is CGEN PLL is not locking on.
Start LimeSuiteGUI, go to Options->Connection settings, connect to device, click “Default” button at the top. Go to CGEN tab, set CLK_H frequency to 61.44 MHz, click “Calculate”, there should be no errors. If it fails, try changing CSW_VCO_CGEN values to 0 and 255, doing that check if the VCO Comparators values changes. 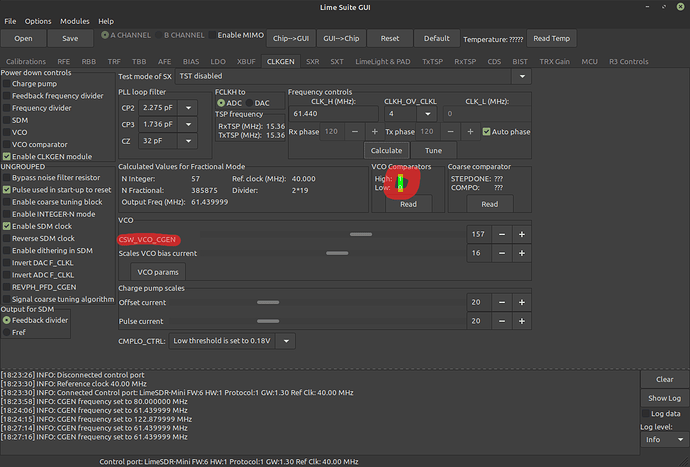 As soon as I clicked the DEFAULT button it showed a dialog box saying it failed and log:

Further when I try to use CLKGEN is says:

As I try toggling the CSW_VCO_GEN parameter, the Comprator value remains unchanged. It’s High:0 Low:0 all the time.

What happened to my Lime?=/ strangest thing is… it was in a locker all that time.

The lime was used a couple of times. Spent 12 + months in a locker in a 3D printed protective casing . USB 3.0 from Asus Zenbook was everything it was ever connected to… and the antennas it shipped with. now the rasp.

From what I understand, and from the logs it seems that the process which you’ve outlined depicts the exactly same API calls the URH was attempting to accomplish, why the assumption tht these wouldn’t fail from Lime Suite?

the “Calculate” button starts a tuning algorithm, that searches for a suitable CSW_VCO_CGEN value using comparators as guides. I asked to manually try setting CSW_VCO_CGEN values to 0 and 255, to see if the comparators are working properly. Apparently in your case they are always 0, so that explains why the algorithm fails.
I have no idea why the comparators have stopped working, it’s definitely not a software/firmware issue.

Anyone else? I don’t really have hardware knowledge needed to assess low-level inertias of this equipment.

Even ‘hardware-fellas’, I talked to, who do high-precision soldiering on daily basis not really know how to tackle this.

I cannot find many of such cases on the Internet, did I just get extremely unlucky?

Maybe some knowledgeable folk could take a look at the above, please?

No idea what happened to it. It was unused in original casing, the transparent one, with screws in each corner, with logo cut out. It worked just fine 12+ months ago, was fed with USB 3.0 and 2.0 from asus zenbook… guess I already said that… tried flashing older firmwares/gatewares - no luck. Last time it was plugged in- it worked just fine.

Any guidance for ‘hardware-fellas’ as to which part/elements of the board ‘to check’ would be appreciated.

Anyone ? It’s like I still haven’t thrown it away.

In my desperation I will allow myself to tag @Zack as of the 1-3 people who reply on this forum he seems to be knowledgeable in hardware.

Hi @vega4,
Contact the seller to see if it is still under warranty and ask for replacement. Something is wrong with clock generator inside of LMS7002M.