I have been interested to install QRadio-link on my smartphone.
On an old thread Adim was thinking of releasing the Android version of QRadio-link but I have not seen further news.
Anyone here may have a running version of QRadio-link on Android. I can do the electronic but the coding is not my forte so porting a Linux app to Android is a bit beyond my abilities.
I do appreciate any help so I can finish building my VHF, UHF, SHF portable station with the LimeSDR mini.
73 de Pat W3PO

Nope, sorry. I did not have enough time to consider a port of the user interface to Android and I choose to focus on other parts. You’d better hope KDE Plasma Mobile makes it to production soon because that shoud support Qt5 GUI nicely.

The next iteration of this SDR transceiver is a faithful clone of Gqrx but with transmit capabilities for most common waveforms, including FreeDV.
Here is a preview of what the desktop interface will look like: 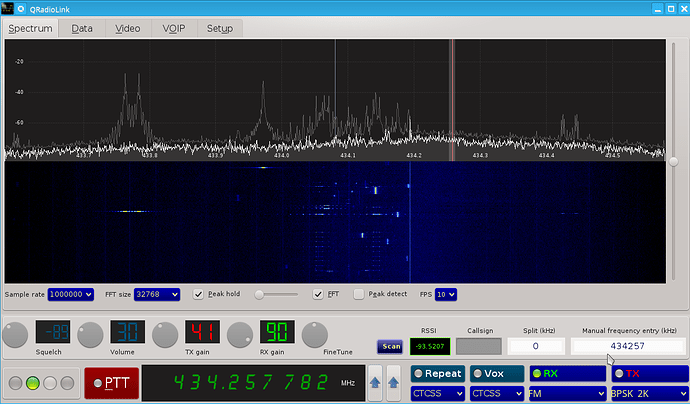 First of all thank you adim. I was hoping you were the one to answer this question.
What I am trying to realize is the smallest VHF UHF microwaves transceiver.
Now the UI can come in 2 folds: either a mobile phone to interface with the limesdr mini or a raspberry PI zero. I am not so sure the pi zero has the muscle to run KDE mobile but a cheap Chinese phone will.
Now if the PI is strong enough I will include the whole package ( UI+ limesdr mini+ amp and filters and battery)in one box.
Now if the phone becomes the solution then the package minus the UI will be in a box and the phone/UI will be connected via cable or BT.
I read info on KDE mobile on their site and just with the info in it it seems the software might be good and stable.
As for your new iteration of Qradiolink I will keep an eye on your site for the announcement.
So thanks again for the answer and your software is definitely the answer for my small portable transceiver.
thank you again and 73 de Pat W3PO
PS if you need a beta tester for the new Qradiolink then please call on me. I have been an active Ham for 44 years and just retired as a ship Captain for Maersk lines ltd.

On Android, there are two problems: the UI and the sound.
QRadioLink uses Pulseaudio on Linux to output sound. Android has its own sound system which conflicts with Pulseaudio, so to get audio working on my old demo I had to disable the Android sound system. That’s not a long term solution. Fortunately, my application also supports the Mumble audio transport protocol, so that could be used alternatively.
The user interface is the hardest problem. I could use the Android NDK to build an Android package that uses Qt5 (this is supported with Ministro), but it would require GNU radio built for Android, and they don’t ship such packages on a regular basis.

Your project is something I had looked at for a long time. You don’t necessarily need KDE on a Pi Zero, any window manager with Qt5 support can work. But the CPU and battery consumption is something that you need to consider. The Pi Zero CPU is single core, and GNU radio works best on 4 or more cores.
There are small multicore compute modules with better CPU than the Pi Zero. and with USB3 support. Take a look at the NanoPi Neo4 for example.
Ideally, compute heavy operations like resampling and FFT calculation would be performed entirely on the FPGA. I don’t know if the Lime mini FPGA is large enough to have space for multiple FFT of different sizes.

Thank you Adi,
I am on the exploring stage and I am looking at what to do with the Limesdr mini.
The smartphone with KDE mobile seems an interesting route as it keep the UI and the radio innards in separate locations.
I have been reading on KDE mobile and a cheap Chinese phone would be the start of the experiment. Also I found on google play apps like Linux deploy and Andronix but now I shall be searching for something with Qt5 support.
Also if you have the time please let me know what you think of KDE mobile as of now. Their web page seems to suggest it is ready for prime time.
I went and looked at the PI nano but the power consumption seems to pit it out of the running.
Congrats on the new release of qradiolink I shall follow with great interest and DL as soon as I find a suitable platform
Cheers de Pat W3PO

Hello all,
I am not so sure anyone looking at this thread anymore but my search continues.
I have explored the eventual rooting to windows 10 mobile which will support Qt5. Anyhow I have understood that for audio issues I have to disassociate myself from Android.
Now there is always KDE mobile but before I root I like to hear from people who might have experimented on this route or any other route as a matter of fact, as I am fairly certain that i am not the only one looking for a solution in a mobile environment.
Adi new Qradiolink looks promising but the telephone platform is still an unknown.
Also i have a mobile phone with USB3 so the connection to the limeSDR mini should not be an issue.
Thanks to all for any input
73 de Pat W3PO

You can run Linux and a LimeSDR application on a no-root distro of Ubuntu - I did it on an LG Smartphone and you can see the evidence in this Youtube video:

It’s been a week in the making, but it’s done and I still have a little more work to do on it before I’ll work on an actual Android port of SDRAngel. What I have is SDRAngel compiled/installed/running under a Linux installation of Ubuntu Xenial (16.10), tuned to 162.475 MHz (local weather frequency for Cedar Rapids, Iowa), Narrowband FM (NBFM) demod operating on a rooted Android LG G3 smartphone. There was no audio from the app while running from Ubuntu Xenial, but I think it’s a prefs thing bet…

But I like the way that Adrian is going with his software - it might be ‘portable’ to the same platform, too.

There’s also SailfishOS which is not completely open source but is more mature. I had a phone with it but the speaker quit so I shelved it. It is based on Qt so any Qt applications should work.

The user interface for mobile is a whole different story. You don’t have much space to spread your user interface on, so it has to be specifically designed. However Qt5 is big on user interfaces for embedded devices so I’m optimistic.

Thank you Adi and Marty,
I really like what Adi is doing with his software and most of all the various modes.
For the time being I shall wait and see to discover what he hears out on various platforms.
Anyhow this idea is taking shape and I have time as I am miles away from the LimeSDR mini.
I travel quite a bit in my retirements days and now I am spending this coming winter in the Philippines so tests with the SDR will have to wait till spring 2020 but the testing of the software on the phone can start.
Marty I am very familiar with SDR angel and I have a copy on my computer even though these days SDRconsole is my preferred app with the mini
Cheers de Pat DU3/W3PO

My previous approach on Android was to use VNC. These days, I’d like to avoid all that overhead and go with a native Qt build. If I have the time, that will happen soon. If not, somebody else will have to step up to the plate. QML user interface will work on mobile devices better, but basically requires a lot of code rewrite just for the mobile interface.