I thought I would start a thread, that anybody can reply to that lists things that can be done with a LimeSDR. The numbering may get badly out of sync but there should be at least 101 ideas out there, from basic through to bleeding edge.

The above is also a good basic test, that RX hardware is working.

2 - Self contained multi-band WSPR beacon receiver/transmitter for HF and 6m. Could be mounted at the antennas and paired with a ARM single board computer to talk to the internet to relay reception reports.

Weather sats: As soon as a SDR receiver works with the LimeSDR you can do this with WxToImg.

Yes, especially with the LNA & PA I saw here: https://myriadrf.org/projects/front-end-modules/

I don’t know how good it will be on HF, but for 144MHz and above it could well be the basis of a fine portable solution.

7 - interface to self driving public transport (such as Olli)
Someone mentioned disruptive? https://www.youtube.com/watch?v=Ymz4SYVr_EE please feel free to barge in on the LM-thread as well, here: https://cocreate.localmotors.com/jboyle/propose-universal-interface-improvement/

I think these two companies have a lot in common and would be a good match.

11 Radar
The gnuradio blocks for radar, gr-radar has one critical block which is designed around the USRP N210 with Gigabit Ethernet (which is totally understandable since it is the hardware the creator of the gr-radar block has access to use). A new block that at a minimum does what the “USRP Echotimer” block does (synchronised Sink+Source with a sample delay) will need to be created to support the LimeSDR. But because the LimeSDR has dual TX and RX channels it does offer some new opportunities for radar experimentation not available with the current gr-radar block. 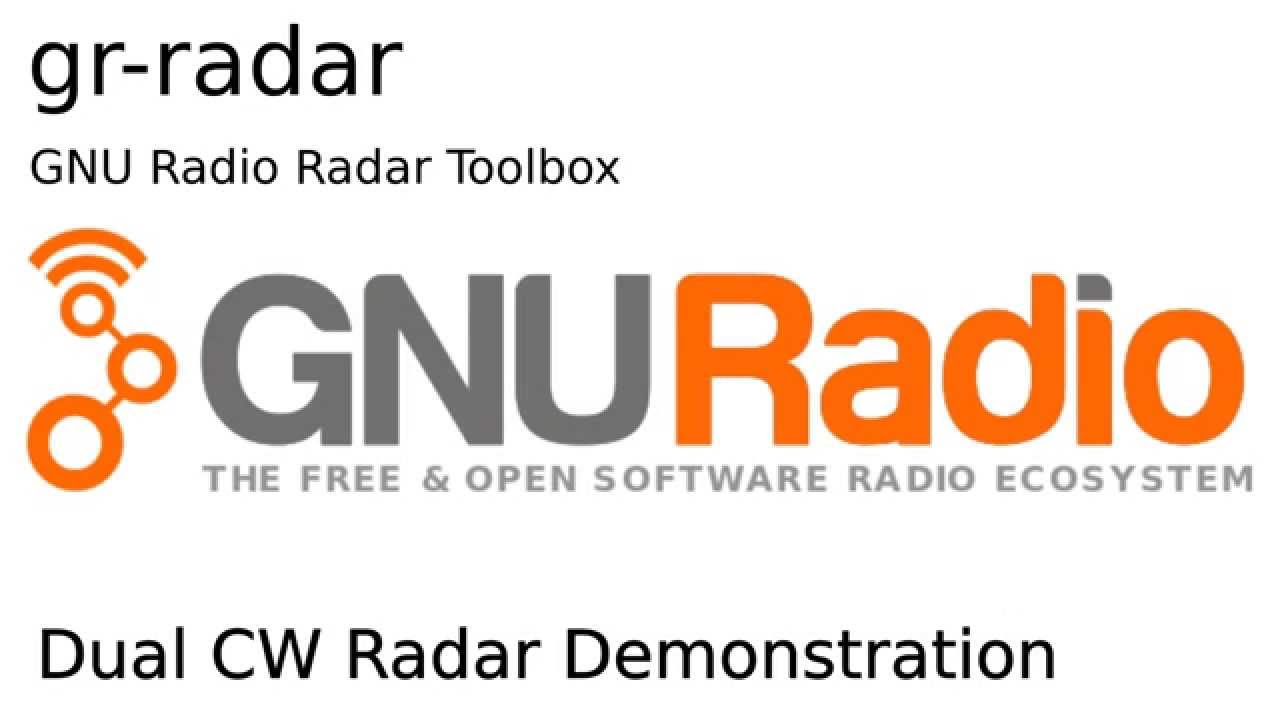 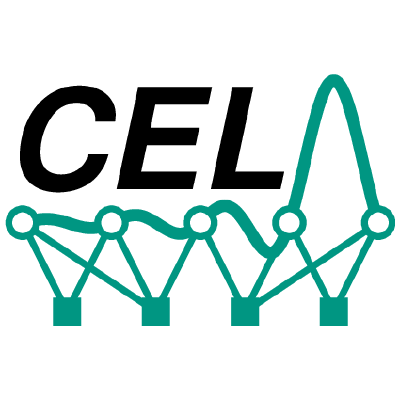 12 “Paint Radio waves”.
Useless, a waste of bandwidth, totally silly and anyone (except for drmpeg) who does this should be shunned

(Also in theory using the LimeSDR, you could receive all marine FM channels from 156 to 174 MHz at once)

AIS 3 and AIS 4 are directed to space for MSS (Maritime Safety and Security) through Satellite AIS Detection.

Each time slot is 26.67 milliseconds long and contains 256 bits of data (9.6kilobits per second)
There are 2250 time slots in each Frame. And a Frame is one minute long.

There is 148 page ITU-R Document called “M.1371-5 2014-02 Technical characteristics for an Automatic Identification System using time division multiple access in the VHF maritime mobile frequency band” which is well worth a read if you are interest in what is going on under the hood with AIS. http://www.itu.int/rec/R-REC-M.1371-5-201402-I ( Annex 8, on page 106, list and explains all 27 Automatic Identification System messages )

14 Recreating Radio History (LFR) - Low-Frequency Radio Ranges
A patent was filed on the 2nd of May 1928 by Eugene S. Donovan, a radio engineer who worked at Ford, for a “Radio Beacon” (US1937876), which broadcasts Morse code N (-.; dah dit; 11101000) from one loop antenna and Morse code A (.- dit dah; 10111000) from a second loop antenna, both transmissions would be at the same frequency and exactly the same power. In fact because of the design details only one CW transmitter was used, so the power and frequency would be the exact same. And eventually they swapped from loop antennas to Adcock vertical antenna arrays, because vertical polarisation results in a stronger receiver signal than horizontal polarisation at frequencies up to about 50 MHz.

The two broadcasts were in effect synchronised and phase aligned, by design, such that the gaps in the Morse code for the N’s would match up exactly with the pulses for the A’s and vice versa.

The stations emitted directional electromagnetic radiation, into four quadrants. The radiation of one opposing quadrant pair was modulated (at an audio frequency of 1,020 Hz) with a Morse code for the letter N (-.), and the other pair with the letter A (.-). The intersections between the quadrants defined four course lines emanating from the transmitting station, aligned along four compass directions, where the N and A signals were of equal intensity, with their combined Morse codes merging into a steady 1,020 Hz audio tone. These course lines, where only a tone could be heard, defined the air routes.

So a pilot would know when they were on course, because they would hear both signals merge into a constant tone, and they would know when they were off course because they could hear one signal more distinctly than the other. And depending on the N or A being more distinctly heard, after consulting their navigation charts for the properties of the LFR being used, they would adjust their yaw to get back on signal, and on the correct course. As well as looking for visual clues in the landscape to confirm location.

The last of these LFR aeroplane navigation towers was decommissioned in the 1970’s. LFR started to be replaced VOR (VHF omnidirectional range) in the late 1940’s, and it is now being replaced by GPS.

Because the LimeSDR has two TX channels this would be very easy to setup (Adcock vertical antenna array not included) , with no need for a RF switch, albeit at much much lower power than the original system (61.8dBm). Also because it is SDR, it allows other transmissions to be broadcast in parallel on the same frequency band, such as talking to the pilot or multiple pilots on multiple channels.

The original operating frequencies were between 190 and 535 kHz
(so the 2200-meter band could be used by a licensed amateur for a demonstration of bygone technology).

Depending on the legal status in your country of spread spectrum communications. In most countries this is allowed, for licensed amateurs, on the 70 cm and 33 cm bands, and shorter wavelength. Which is non-ideal for DRM30, but could be very interesting for DRM+ (even at 23 cm and 13 cm as well).

17 Passive Radar
By using two directional antennas one pointing directly at existing RF source* and the other pointing in the opposite direction. As long as both captured IQ streams are phase coherent, which with the LimeSDR they should be since the same clock was used, then after initial calibration, the distance to a plane (or meteor trails) can be calculated. And the Doppler shift up or down would correspond to the approximate speed towards or away from the transmitter. It is a two dimensional Radar, you know the rough distance and approximate speed, but not the height or the angle. 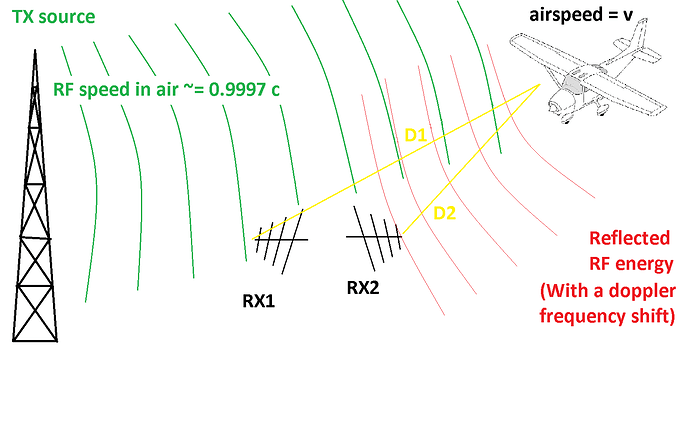 *Terrestrial television stations (analogue/digital), Radio stations (FM, DAB, DRM+, HD-Radio), Mobile phone base stations, Satellites (GPS). The only real requirement is to use a wavelength at least an order of magnitude less than the size of the object.

To simplify, D1+D2 could be calculated by counting the number of samples that were required to shift back in time the signal at RX1 so that it was aligned with the weaker reflected signal at RX2. And dividing that distance by 2 would give the approximate distance to the plane (or a meteor trail).

The above description is close to a Pulse-Doppler radar. But the configuration is probably closer to a monostatic radar in which the TX bandwidth is critical, for calculating the distance. If a single 100kHz bandwidth FM station was being used ( http://www.radartutorial.eu/01.basics/Range%20Resolution.en.html ) then minimum distance resolution would be 1.5km. The problem is that in the frequency domain you can not extract more information from a system than is in the system to begin with. So if there is only 100kHz of information you can not extract 20MHz of useful details.

One interesting side note is that the returned RF will be re-modulated by the vibrations on the surfaces of the aircraft, so at least in theory it should be possible to hear and distinguish, after proper processing, the downconverted audio returned by a helicopter, a propeller aircraft and a jet engine aircraft.

18 ACARS (Aircraft Communications Addressing and Reporting System)
On paper with a LimeSDR, you could channelize the full 8MHz allocated around the world and decode all frames in parallel. ACARS squawks vary from 0.17 to 0.91 seconds in duration. The initial 0.0533 seconds of 128 bits set to 1 preamble, creates a 2400 Hz tone which makes ACARS transmissions easily recognisable with any AM receiver.

There is even a gr-acars2 block in Gnuradio which could be used, it reads in an AM signal and demodulates and decodes the ACARS messages.