FM images all over HF and VHF bands

I have recently received my LimeSDR Mini. I am having issues with images of the FM radio band appearing where they shouldn’t. I have found two previous threads with similar issues (Receiving FM broadcast images on every frequency and GSM Images over FM Band on LNAL), but both recommend low-pass filters to alleviate the issue. As I am getting images both above and below where FM radio should be, I would need multiple band-pass filters, which would not be ideal. Are there any other methods of eliminating these?

I am quite new to radio, and I apologize if I am unclear or mistaken. I have asked a friend more familiar with radio, and after a few hours, they were as confused as I am. I have flipped a few settings in LimeSuiteGUI (probably not the best idea considering I don’t know what I’m doing), but it didn’t change anything. If comedic relief is required, consider that I have written this post with the SDR tuned to 31 MHz, listening to NPR. 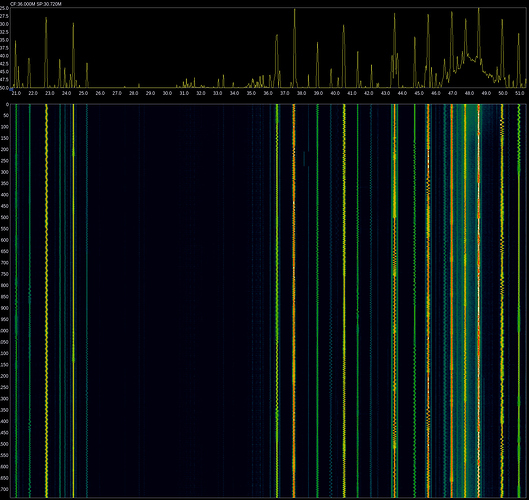 One way to look at a LimeSDR-USB/LimeSDR-Mini board is as a component of a high quality radio. But it has nearly zero no fronted filtering. If you are seeing images of FM everywhere it is because of Heterodyne mixing which takes one signal and creates two new overlapping signals (f1+f2 and f1-f2) and unfiltered undersampling, which ultimately due to Nyquist will produce aliases everywhere. So you have three options and all of them involve adding an external filter to limit unwanted signals from entering the SDR.

But any of the above three filtering options will typically produce much better results than an unfiltered RF frontend, depending on your local RF environment (If you were on an island in the middle of the ocean, adding a filter may not help, in fact it might be detrimental because it would add ~3dB of attenuation).

LimeSDR has a separate board LimeRFE board that has a series of bandpass filters with power amplifiers for HAM, Cellular bands.

RTL_SDR block diagram1253×513 78.7 KB
RTL SDR in tuner section contains two BPF controlled by microcontroller. This is why RTL_SDR tuners are selective but at a cost: higher noise figure! If you put LNA next to antenna you can improve overall noise figure.
For LimeSDR selective BPF is a must if you want decent performance. Do not forget: LimeSDR input LNA covers 0.1-3.8GHz and without BPF A/D will pick up noise all over the place.
You did not write what is your app when multiple filters is not option?
1 Like
yt7pwr 9 July 2021 13:19 #4

Thanks a lot for the links and explanation! I think I understand it a bit better now.

I don’t quite understand why the FM image would move at 3x the speed though, or why it would end up in the target band in the first place. If tuning to 30 MHz, the RXMIX LO input should also be 30 MHz, I think. If that were the case, wouldn’t FM (around 90 MHz) end up at 60 MHz and get cut by the RXLPF (I had it set to around 35 MHz)?

If I understand correctly, the RTL-SDR and other heterodyne radios seem to use a LC circuit before the mixer in order to approximately isolate the desired signal. I will try to make one later.

If you are throwing together a quick analogue filter, I used to use this site for RF filter design: https://www.changpuak.ch/electronics/index.php#

The only thing that it is missing is a Monte Carlo plot, for the random values with 5% tolerance of the components I selected.
EDIT: Under export there is an option to select Monte Carlo for analysis in LTSpice!

The thing about SDR is that there is a lot of complexity, and explaining what looks like a simple problem gets hard fast. And I’m no expert, I’m still learning.

If it is moving 3x the speed, it’s not a simple heterodyne mix, but a harmonic. Likely the FM signals are so strong they are overloading one of the device’s stages, and are thus creating harmonics in the device. You can test by dropping the IF and/or RF gain, and seeing if the rate at which the spurious image drops is greater than the reduction in gain; e.g. if you drop the IF by 1dB and the spur goes down by 3dB.
If that is the case, you need to reduce the gains until the harmonics go away. That still won’t fix the issue of the images due to heterodyne mixing, but it will help the spurs.
The best solution is a filter at the input to remove the FM band - either a low pass for HF work, or a band pass for VHF work. Mouser Electronics has a good collection of RF filters that can be used for this.
That’s the thing to remember on setting gains for wide band receivers like most SDRs - it’s not the level of the signal of interest that determines the gain, it’s the level of the strongest signal in the receiver’s front end bandwidth.